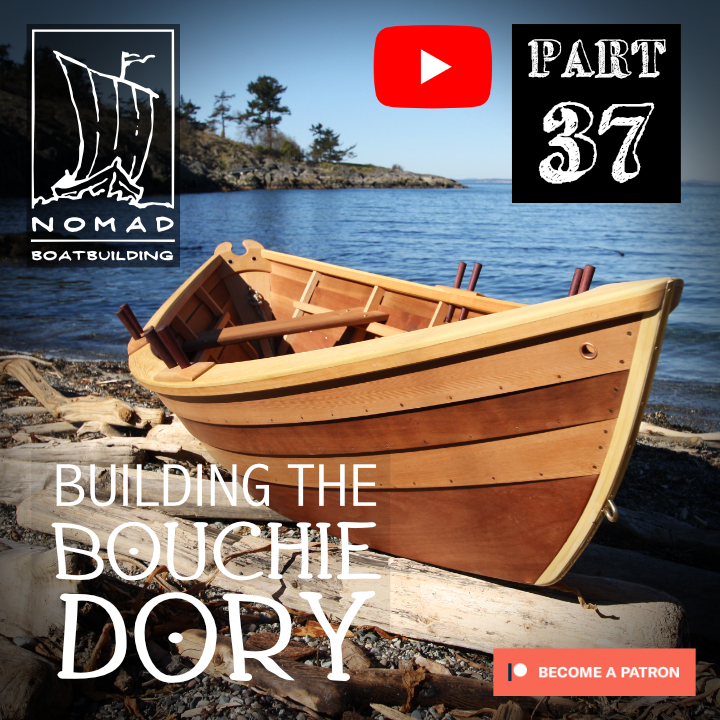 Launching a new boat and getting to put it through its paces is actually something I don’t get a lot of chances to do.

There are a number of reasons for that but an overwhelming one is that after all the effort I put into a boat, I don’t want to mess it up. I don’t want to have to try and fix any dings or scuffs. It’s enough of a hazard just having the finished product hanging around the shop a day or two longer than necessary.

In this case I had a couple things that made me decide to try it out. First was that the customer was coming from afar and I had time to take the boat out for both decent pictures at the beach and sea trails. Second was that the boat was sent out unfinished which mean that there was still paint or varnish yet to come so I didn’t have to worry about messing that up.

Lastly, I really wanted to see how this boat handled because it was a new design and in fact, I redesigned it during the lofting stage. When faced with the full size drawing of the first version I decided that it was far too narrow on the bottom and would have been excessively tippy. This was due to the fact that I was trying too hard to emulate the traditional Grand Banks dory lines. It just didn’t translate down to this small scale.

Even with the changes I did find this modified version a little tender (tippy) but I very soon got comfortable. You have to literally try and tip a dory hull over before you can appreciate how much secondary stability they actually have. I had one dory hull style canoe that didn’t feel stable until I heeled it over to within a couple inches of the gunnel. Then it felt rock solid.

I can’t say enough good things about the thole pins. I would put them into my own boat in a heartbeat.

I had reservations about them, influenced by using other traditional rowing arrangement in longboats.

Of course in retrospect, it was my own inexperience at the time that negatively affected my experiences. With a reasonable sense of how to feather oars properly, one can get a lot of enjoyment out of the thole pin arrangement. I only wish my oars had been properly leathered but I only had a beater pair on hand.

All in all I found the finished boat to be really enjoyable to row. I would have liked to see it lighter for someone who wants to get it into truck beds or get it over a lot of beach obstructions. I think re-visiting the design and developing a light plywood version would be worthwhile.