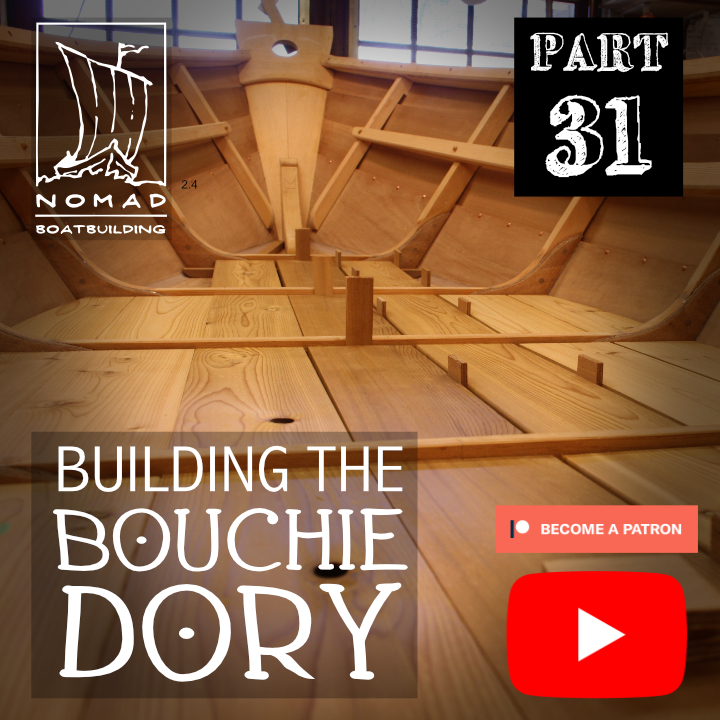 In wooden boats we tend towards simple traditional finishes. Varnish. Alkyd Enamel and boat sauce. In all of those finishes linseed oil, or a similar curing oil is the foundation upon which all of them are formulated.

In today’s video we used boat sauce which is a bit of simple workshop chemistry that you can relatively safely play with.The recipe is not etched in stone but it follows some basic principles. At the heart once again is linseed oil. To this we add thinners to do just that…thin it out for greater penetration. Then we add a modifier – varnish to add some hardness or pine tar to add some rot resistance and softness. Sometimes japan driers are also added to speed the drying process.

Back in boat school we used raw linseed oil mixed 1:1 with turpentine and then about 5 or 10% pine tar was added to that. We would warm it in a double boiler and apply it hot to reduce viscosity and encourage penetration. That was a recipe handed down from its founding instructor Bob Prothero. The thinking was the slow, almost no drying encouraged the greatest penetration and boats built by the Prothero’s (Bob’s brother Frank was also a boatbuilder) do have a a very good reputation for longevity.You could usually smell us boat school students a mile away in Port Townsend, WA but there were so many boatbuilders in that town that we would blend right in. Nobody would blink an eye if you walking into a cafe filling the air with the pungent tarry smell of boat sauce.

My boatbuilder friend Tony Grove used a 1:2:3-solvent:oil:varnish recipe for the wide plank fir floors if his house. They have a good ten years on them now and I have always been impressed with how well they have held up.I mostly flip those ratios around for my own purposes. 1:2:3 – varnish and/or pine tar/oil/solvent. A mix like that I would use on planking or any application where quality of finish isn’t a big concern.

I keep a boat sauce jug in the paint room into which goes all the tailings of varnish and oil pots. This slurry gets a glob of pine tar added and I now use odourless mineral spirits or low odour paint thinner in my boat sauce to reduce the smell. I do miss the sweet pong of turpentine though. I tend to use this mystery mix on canoes when I do a re-canvassing job but most new boats get a fresh batch using virgin components.

One thing about boat sauce is that it will eventually turn black when used in areas exposed to the weather and dirt. That is a characteristic that I don’t personally mind but you can reduce that tendency to blacken by using tung oil rather than linseed oil.

Boat sauce is also intended to be re-applied on an annual basis if no other finishes are used over top of it. All that is required to prep for that is a good cleaning the day before slapping on another coat. Excess boat sauce should be wiped off after half an hour or else it may remain sticky for some time to come.

These days there are a wide variety of finishing oils on the market, including waterborne formulations. They will all work as a substitute or foundation for boatsauce but I wouldn’t use the higher prices furniture finishing ones like Osmo on a boat. There’s just no need. Many of the types sold at your local hardware store marketed for outdoor furniture, fences and decks are probably 50% solvents already so read the labels carefully. Linseed is cheap enough that it usually isn’t thinned to start with.